I think I’m an environmentalist, but I don’t think there’s another word in the English language that invokes so many people’s different points of view to what it is." - Kyle De Lima, Trinidadian environmental activist 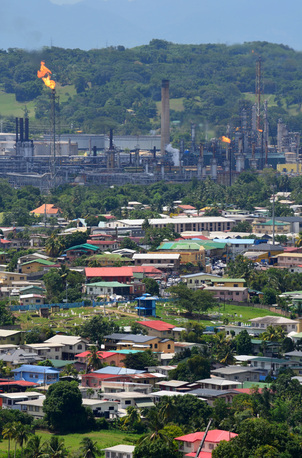 Trinidad and Tobago is nothing but a juxtaposition in the form of a dual-island Caribbean nation.  Look left, oil rigs dot the horizon.  Look right, tourists relax in the cobalt blue waters enveloping the Buccoo Reef.  Look north, dedicated environmentalists succeed in banning sea turtle hunting.  Look south, activists fail to stop new construction that brings further controversial energy exploration to the country.  Even from where we began our research in the U.S., we could immediately see an immense conflict between the oil and gas companies that support the country's way of life and the country's lifeblood, its environment.

The Internet and phone calls only tell you so much, so we hopped on a plane and headed off to what would be a month of slogging through a garbage dump, industrial estates, an abandoned government complex, quarries, rivers filled with sewage, and fortunately a few gorgeous beaches...and that's not to mention the bureaucratic red tape. All this was accomplished with funding from our alma mater's Institute for Sustainability and Energy at Northwestern and Office of Undergraduate Research, as well as assistance from our advisor, Stephan Garnett.

What emerged was a picture at once as detailed and murky as ever.  Here, we begin by writing the story of those fighting to protect the environment from uncontrolled development.  Then, we show you what it looks like on the ground with photography, and finally we take you inside the salient discussions with video.  Throughout, feel free to refer to our links and annotated map for perspective, or email the  authors.  Thanks for stopping by, and read on.
Powered by